Show Your Sweetheart You Care!

Valentine's Day is just around the corner! In lieu of the traditional box of chocolates, roses, or mushy greeting card, why not go with a present that's a little more....WILD! 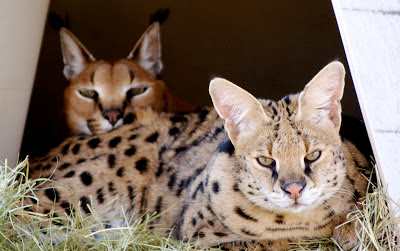 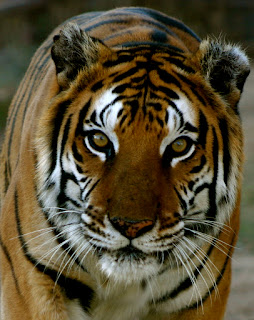 There isn't much better than bonding with an incredible exotic animal. That's something that each of us here at IEAS can attest to, and we want you and your sweetheart to know what it's like! This year, for Valentine's Day, how about you Adopt an Animal for you and your loved one? In doing so, you will be able to visit with your chosen animal by spending time with them and your monthly adoption donation will directly contribute to your animal's life, ensuring their happiness, comfort, safety, and security. The animals really do come to know and love those parents who come see them. You wouldn't believe the bonds formed between dedicated Adoptive Parents and their chosen animals, so experience it for yourself! Click here for more info on adoptable animals and the adoption process!

Looking for something a little smaller, but just as awesome? How about an Animal Packet? The purchase of one of these packets allows for a one time visit with your sweetheart's chosen animal! It's truly incredible to share time and space with one of these regal animals, and it's a once in a lifetime experience that might be just the thing to show how much you care! Click here for more info on Animal Packets!

Remember, all donations are tax-deductible and 100% of the money from your purchase directly benefits the IEAS animals. 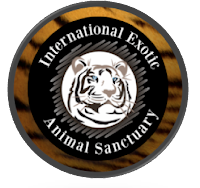 Posted by International Exotic Animal Sanctuary at 8:32 AM 0 comments

Ever wondered who comes in to save the day when one of the IEAS residents is feeling a little under the weather? Well, meet Dr. Greg Moore, the IEAS veterinarian! 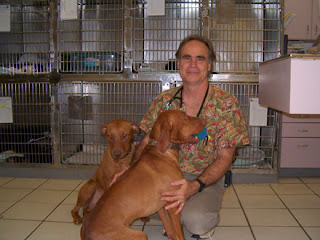 The experience working with exotic animals that Dr. Moore brings to IEAS makes him perfect for the job, and his years spent teaching at Texas A&M, not to mention his eagerness to share his wealth of information, gives interns and staff the added bonus of being able to observe and learn so much from him!

We couldn't be more thankful to have this talented, experienced, and dedicated veterinarian to care for the IEAS animals when they need it most. Performing operations, diagnosing problems, and prescribing just the right medications on such sensitive and dangerous animals is a tough job, and we're glad Dr. Moore does it!
Posted by International Exotic Animal Sanctuary at 12:41 PM 0 comments

The Truth About Bears: "Hibernation" 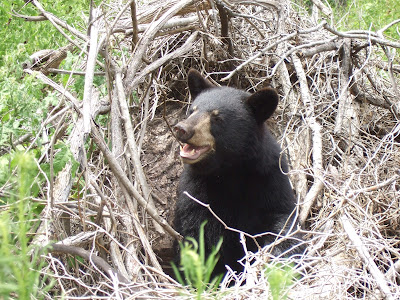 Hibernation is when animals "sleep" through the winter. During this sleep, the animals will not wake up when they hear a loud noise or even if they are moved or touched. While in torpor, the animal can wake up quickly and easily. During true hibernation, the animal's body temperature drops to match the outside temperature, and their heart rate and rate of breathing slows down. During the bears' dormant state, or torpor, their heart rate is extremely low but their body temperature is relatively high, and they won't eat or release bodily waste. Animals hibernate as a way to adapt to their surroundings. They have to be able to survive the cold weather. They hibernate to escape the cold and because food is scarce.

To get ready for hibernation, animals will eat more than usual during the fall to store up body fat. During hibernation and torpor, they will use up this extra body fat to live off of while not losing any muscle. This allows the animal to come out of thinner, but still as strong as it was before winter. They will get their dens ready for hibernation during the late fall. The bears of IEAS usually get ready in late November depending on when the cold weather hits. The black bears in Bear Orphanage have taken full advantage of the caves we offer, but there are those who still dig a den. 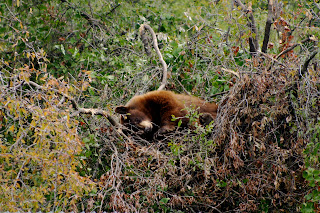 For the bears of IEAS, they react differently during the winter months. All of the bears, grizzlies and blacks, store up during the fall, increasing their body fat. The four Grizzly bears will store up during the fall as normal, and once it really cools down (usually late November to mid December depending on the year) they will den up only to come out during the warmer days. When they do come out, it's only for a short bit, and they are not very active during that time. They are quick to retreat back to their cave. The black bears slow down and spend most of the time in their dens or caves; however, they still snack a little throughout the winter. Dakar and Meyote did become dormant and actually dug their own den during their first winter in Bear Orphanage, but have been a little more active during the winter seasons since then. We believe this is due to the other bears residing in Bear Orphanage. Their first year, it was just the two of them. Now, there are 8 bears residing with Dakar and Meyote!
Posted by International Exotic Animal Sanctuary at 10:49 AM 1 comments 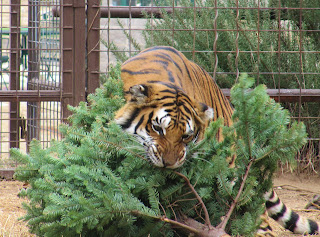 We want to send a ROARING thank you to everyone who donated their Christmas trees this year! The enrichment hand out was a huge success: lots of fun for the animals and lots of entertainment for us! This year when we handed out the trees, the weather was a bit cooler, which always puts the cats in a frisky mood, so we had a great set up for excitement!

As we handed out the seasonal enrichment items, there was no shortage of pouncing, chewing, throwing, and playing. Noel was eager to rub all over his tree, letting the pine needles comb through his fur and soaking himself in the fresh new scent! He spent at LEAST thirty minutes with his head buried in the limbs of the tree! The Triplets weren't as keen on rubbing on the trees. They felt more like pouncing and throwing their trees all over their habitat. They were chasing each other around carrying the new toys, only stopping to take a chomp at the branches! 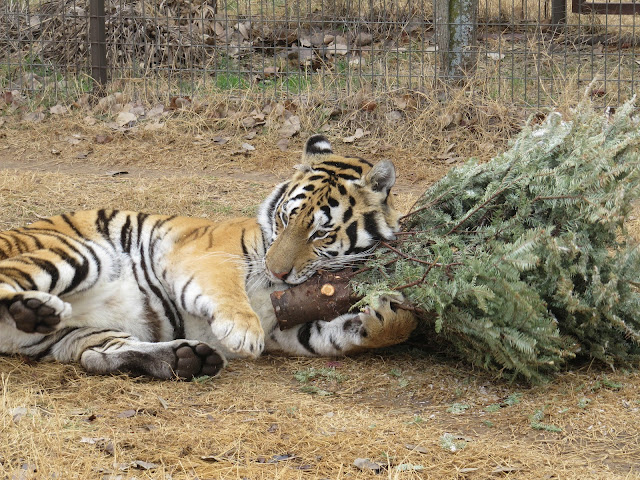 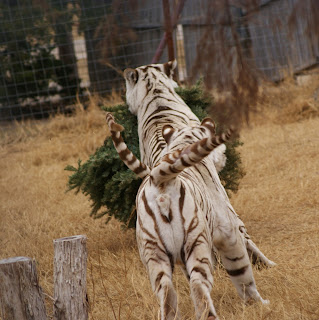 Even some of the animals who didn't show an immediate interest in the trees (largely because they were more interested in saying hello to all of us standing around their habitats) had a blast with them eventually! We found trees shredded up and thrown all over the day after the initial handout. I guess some of them like to enjoy their toys in private - especially Makeen, who dragged his tree all the way into his house, which was a pretty tight fit considering the size of the tree compared to the size of his doorway!

We are just thrilled with how much the animals loved their seasonal treats, and we can't thank you enough as it wouldn't have been possible without you.

Being able to provide the animals with these trees creates an opportunity for absolutely ideal behavioral enrichment, wherein the animals are able to exhibit many natural and instinctive behaviors. We love when they feel as WILD as they are, and that moment when they POUNCE right onto their new trees is perfect for that!

Thank you all for your wonderful donations. You made the IEAS animals very happy!
Posted by International Exotic Animal Sanctuary at 12:19 PM 0 comments