We have two new residents at the International Exotic Animal Sanctuary!! 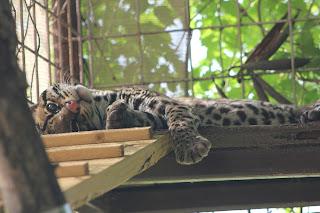 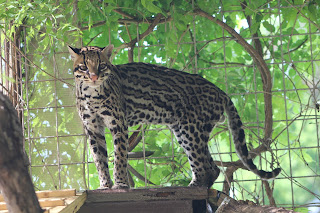 Meet Rob, and ocelot that came to us from a zoo. We are told that Rob was very shy at the zoo and did not often greet visitors, additionally they wanted to make room for a new breeding male. We gladly met the transfer team in Texarkana and transported Rob to IEAS in his kennel. Once at IEAS, we placed his kennel inside his new habitat and opened the door. It took Rob several hours to venture outside his kennel. Initially he would explore a little and return to his kennel. Once he started using the habitat’s igloo for shelter, we removed his kennel and he is right at home. Now, after just a few weeks, he regularly ventures out and uses the perches and ramps. He is even frequently more social than our other ocelot, Rio. Since I was part of the transfer team, I asked for the assignment of sitting with Rob daily for emotional enrichment. He has already become used to my presence. A clear sign of this is that he has even been comfortable enough to eat nearby where I was sitting. 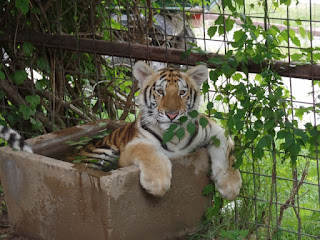 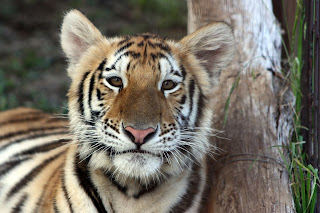 Meet Nahla, a 5 month old orange Bengal Tiger from Conroe, Texas. Nahla was a former house pet found wandering the streets in Conroe following a storm and was picked up by the local animal control. When we found out about Nahla, our executive director spent several hours negotiating her transition to IEAS. Nahla was delivered to us just a few weeks ago. She is starting off out in our quarantine area, this is our normal protocol to ensure that she is healthy before her move to her permanent habitat.  It did not take long for our staff to recognize that she especially loves to play in water. It is also obvious that Nahla is very social and loves company. She is very curious of the other animal residents, and always will come over to greet staff, interns, and tour guests. Meanwhile the interns and staff are busy preparing her permanent home where she will move following her quarantine period. Her new naturalistic habitat is complete with a good-sized pool, to fulfill her love for water, perches, large house, shade and sun areas.

Enjoy this video of Nahla checkin out a water tub for the first time!

Being able to continually bring in animals in need of a safe and permanent home is all thanks to our supporters.  Without generous individuals and companies we would not be able to do what we do and provide all the present and future IEAS resident animals with the care they deserve.  If you would like to donate to the Sanctuary or adopt one of our resident animals please visit our website: www.bigcat.org.

King of the Jungle

King of the Jungle

(Odin, our own male lion, surveying his kingdom.)

Lions (Panthera leo leo) are well known for their command of the sub-Saharan African plains.  As the largest predator in their habitat (reaching almost seven feet in length), the lion sits comfortably at the top of the food chain. Especially the dominant male lion, as he is rarely the one to take down prey but is always the first to eat. The lions social nature- unique among large cats and solely represented by the lion, allows them to form a hierarchy within the pride with the dominant male lion seated on top as king. While the females, almost always related within the pride as mothers, daughters, sisters, aunts, cousins, etc., are the best hunters- the males are larger and stronger and therefore, are relied upon for protection as the leaders of the pride.

(A pride of lions in sub-Saharan Africa.)

Lionesses do not exhibit any social dominance over one another, that is, not one female is the leader of the other females. Each lioness plays an important role in the social structure of the pride, each has her place in the hunt, and each takes a role in mating. The females who refuse to participate in mating with the dominant male lion may be chased out/banned from the pride, or killed. Lionesses will care for each others young, cross-nursing them, as they tend to all give birth around the same time.  This strengthens the females’ bonds to one another, ensuring the safety of their young against any would-be invading male lions.

Male lions, on the other hand, are pushed out of the pride as they approach maturity, usually with their brothers or other male cousins born around the same time. This ensures no competition for dominance within the pride, increases genetic diversity among all lions, and prevents inbreeding causing genetic mutations. There can be several male lions within a pride, but there is always one that is most dominant above the others. The king of the lions is the largest one with the most pronounced mane. Although, there are some prides which have formed coalitions, being ruled over by two-to-three dominate males, spanning vast distances, and being comprised of a few prides together.

(Odin’s mane, now that he is three years old, is very full and reaches down to the center
of his back, he would certainly be a more dominant male in the wild.)

What many people do not know is that this beautiful giant not only roams on the African plains; but also in the Gir Forest National Park of India. When once lions roamed all over the Asian, African, and European continents- now only a small population (several hundred) of Asiatic Lions (Panthera leo persica) remain to call this national park home. A dominant male asiatic lion may just be the true “King of the Jungle” as their habitat would imply. These lions are reportedly larger than their African counter-parts, reaching lengths of up to nine feet. However, while still maintaining the social skills common to all lions, Asiatic lions divide into prides much differently than those seen on the African plains. In India the lions are separated into two prides- one male, and one female. The two prides come together only during mating season each year. After their four-month gestation period, cubs arrive, and true to lion pride etiquette- the females stay with the female pride, and once the males are mature enough to go out on their own they are sent to find the male pride.

(Shauna and Nala, left to right respectively, both know how to relax in the summer heat… Nala maybe more-so.)

African lions are listed as “vulnerable” by the International Union for Conservation of Nature’s (IUCN) Red List of Threatened Species. Due to the threats they face from hunters, habitat loss, and diseases- their numbers have decreased by almost half in the past two decades alone. In 1975 there was an estimated 250,000 wild lions in Africa, today those numbers have dwindled down to approximately 30,000 individual African lions. Asiatic lion are listed as “endangered” by the IUCN’s Red List, however, their numbers in recent years have been steadily increasing. There were an estimated 177 Asiatic lions in 1968, 359 in 2005, and most recently their numbers have been estimated to be around 523 individuals in 2015. Hopefully these numbers, as well as those of their African cousins, may steadily increase well into the future giving these gorgeous giants a chance at surviving alongside our human populations, instead of fighting against them.

(Shauna, Odin, & Nala all deserve to be represented by their wild relatives well into the future!)

At the International Exotic Animal Sanctuary, conservation education tours are given to educate the public about various exotic species. IEAS is home to 74 residents; 30 bears, 37 felines, and 7 other exotics, including wolves, coati, ring-tailed lemur, and capybara. Before tours begin, guests meet in the gift shop where they can look at various merchandise, see images of current residents and learn about adoption packets. All proceeds go to the residents at IEAS!

During tours, guests are taken around the Sanctuary with a staff member, intern or volunteer. A typical tour will last around two hours and guest will walk roughly 1.3 miles. It is a great way to exercise, explore the outdoors and learn about conservation and natural species history. As an intern, I look forward to educating the public and observe the residents' behaviors. Each time I give a tour, the animal residents are doing something different; no two tours are the same! It gives me the chance to learn more about each of their unique behaviors. My career goal is to become an exotic veterinarian. Exposure to various species, their natural history, conservation and behaviors are a fantastic way to strengthen my knowledge about exotic species.


I like to observe our four grizzly bears’ behaviors. Wendy, Willy, Papa Bear, and George came to IEAS in 2007 from a facility that believed their two older grizzly bears were unable to reproduce.  Once the female gave birth, the facility could not afford to build them a proper enclosure or care for them. Quickly, the four of them adapted to their new environment here at IEAS and love playing with each other. On tours, the grizzlies will play with toys, wrestle, lay on perches, bath in their pool or walk around their habitat. Guests of all ages enjoy watching these playful, cute, and goofy animals!

Another tour favorite is Popeye, the ring-tailed lemur.  You can find him bouncing, climbing, and vocalizing during tours. He is quite the showoff and loves the attention tour guests provide for him! Popeyes' habitat is located in the prime location for his personality. As soon as a tour group reaches his habitat, he begins leaping around. Immediately, tour guests notice Popeye rubbing his forearms on branches. Ring-tailed lemurs have scent glands located on their forearms. By rubbing items in his habitat, Popeye is putting his scent on everything and claiming it as his!


Stop by IEAS to experience your own tour and learn more about these amazing animals! Tours are given at 11 am Monday-Sunday with an additional tour on Saturdays at 3 pm. Children seven years and up are admitted and more information can be found at www.bigcats.org/tours. Read our tour testimonials and we look forward to seeing you soon!
Posted by International Exotic Animal Sanctuary at 12:11 PM 0 comments